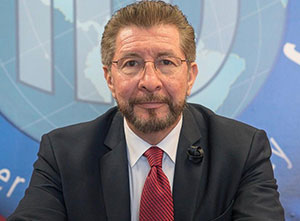 Starting with the preparatory events for Russia’s invasion to Ukraine to the actual coverup of war crimes, crimes against humanity and crimes against peace and security, Cuba’s regime, as Russia’s diplomatic, intelligence, and propaganda operator and as the invader’s main platform in the Americas, actively participates with Russia in the violation of international peace and security. The Cuban dictatorship who, for decades, has benefitted from Europe’s and European nations’ open economic and political backing is -today- the attacker against and the enemy of Europe, the countries that are therein and its allies.

The Interamerican Institute for Democracy’s forum titled “Cuba in the Invasion of Russia to Ukraine” has placed the focus of attention on the important role of Cuba’s dictatorship in support of Russia’s attack and crimes in its invasion of Ukraine, who -facing the violation of international peace and security- has now become “the bastion for Europe’s defense.” Today, Cuba is an aggressor State against Europe’s nations and the European Union who -ironically- provide it with economic, commercial, and political support.

Strategically, Russia’s invasion to Ukraine is an attack against Europe. The fact that Ukraine is not part of the North Atlantic Treaty Organization (NATO) is the reason that prevents direct military action by members of this collective assistance and mutual defense institution in cases of attack. Member States, however, are not precluded to assist Ukraine with military and economic resources and to impose sanctions just as Europe, the United States and the most important democracies of the world have done.

The world is living through the “First Global War” in which there is no neutrality. In international law, neutrality -to be considered as such- must have two components; the “non-participation” and the “impartiality” of those wishing to remain “neutral.” Having said that, the fact of solely not being a part of armed actions is not neutrality when there is any kind of support that expresses preemption in favor, or against, one of the parties in the conflict.

When there is active participation in the backing of armed operations with intelligence, promotion, propaganda, diplomacy, and influence efforts in other countries, just as Cuba does regarding Russia, we are faced with an open participation in the attack and the violation of the universal obligation of “keeping international peace and security” established as a fundamental principle of the United Nations Organization.

Beyond the consideration of legal arguments, the facts prove that Russia and Cuba’s regimes have common elements because they are governments with political prisoners, persecuted, and exiled. Both wield power through “State-terrorism” and with the violation of human rights. Putin and Castro/Diaz-Canel have eliminated freedom of speech and freedom of the press, they have ended the “Rule of Law,” they simulate the separation and independence of the branches of government and both are regimes that use force against their people. Cuba practices slavery in the 21st century, exploiting technicians, professionals and other personnel and Russia conducts mandatory conscription of young people to be sent to war against their will and without proper training.

On 23 February of 2022, the regime stated through dictator Diaz-Canel that “Cuba has aligned itself with Russia and asks the Western world to stop intervening in Ukraine” expressing that “the efforts of the United States to impose the progressive expansion of NATO towards the borders of the Russian Federation constitutes a threat to this country’s national security…” On 28 February, Cuba backed Russia in a vote over Ukraine at the U. N. On 8 March of 2022, this same Cuban dictator wrote “the conflict could have been avoided if requests to guarantee the security of Russia would have been addressed with seriousness and respect.”

At the United Nations, Cuba has repeatedly voted in favor of Russia’s invasion to Ukraine. In October it did so along with the dictatorships from North Korea, China, the Central-African Republic, Eritrea, Iran, Nicaragua. As head of 21st Century Socialism, or Castrochavism, Cuba has taken Venezuela and Bolivia’s dictatorships and the Para-Dictatorial governments of Argentina and Mexico, to the abandonment of voting, or abstention, that is no more than another way to support the invader because when facing crimes against peace, war crimes, and crimes against humanity, abstaining is no more than supporting the criminal. There is no possible abstention when faced with those crimes, it is solely a complicity’s façade.

In July of 2022 Putin increased his support to the Cuban dictatorship with the sending of oil and other commodities. The work of Cuban Intelligence Services in the attack against Europe is underway and the “recruiting of Cuba’s volunteers to assist Russia” has already been requested.

*Attorney & Political Scientist. Director of the Interamerican Institute for Democracy.