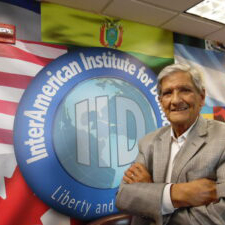 Armando Valladares, writer, painter and poet, spent 22 years in absentia in Cuba's political prisons. He was named a prisoner of conscience by AMNESTY INTERNATIONAL and received the Freedom award from the international PEN CLUB. He is the author of the best-seller "Contra toda Esperanza" where he narrates the horror of Castro's prisons. Translated into 19 languages. US President Ronald Regan read the book and named him US Ambassador to the US delegation to the UN Human Rights Commission. He managed an investigation and later the condemnation of Cuba for systematic violation of Human Rights, for which he received the Presidential Citizen's Medal and the Superior Award from the Department of State, the highest recognition that a diplomat can receive. He received the International Journalism Award ISCHIA, Italy, the José Cecilio del Valle Order, the highest distinction for a foreigner from Honduras. He is the author of "From my wheelchair", "The heart with which I live", "Caverns of Silence" and more. He is director and member of the Board of the Inter-American Institute for Democracy where he chairs the Human Rights Commission.